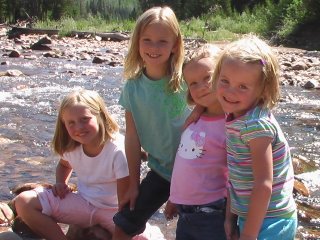 I goed to the zoo today with my friend and his name was Griffin. We had lots of fun and they had a dog named Ozzie. It was so fun that we goed to the zoo. They came to our house today and I forgot it was Sunday. Then we took a little nap. I was worried if they were here already because their church was long or short.

I saw you Bridger, at the zoo. I'll buy you a prince crown when I'm at the store again.

I caught my first fish and it was a dinosaur fish but it's really called a dino. I know it's not a dinorsaur but really a fish. I went camping a little later ago and I love going camping. I sleeped in my tent and then I goed home. 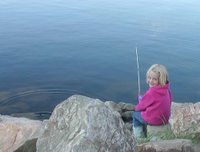 [Dad's Note: We went to the zoo on Saturday with our friend Griffin who's my age. They came to our house for dinner today, Sunday.

Camping was last weekend in the Uintah's with a bunch of friends. The fish she caught was actually called an Albino fish.]
Posted by Sami at 9:27 PM 1 comment:

Are you OK at the Hostipal? 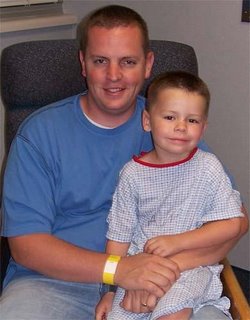 Are you doing ok in the hostipal? Does your throat hurt? Are your tonsils out ok? Did they pinch your throat a little?

[Dad's Note: Bridger and his family have been having some bad luck lately. You can read all about it on Bridger's blog, www.thedinosaurboy.com.

I asked Sami if she wanted to post a picture of Bridger on her blog. She chose this one of Bridger and his Dad which was taken at the hospital last week when he got his tonsils out.]
Posted by Sami at 9:24 PM 1 comment:

I Know How to Ride My Bike Today

Guess what I did? I rided my bike the whole time. I really didn't need any help, but I needed help getting started. But guess what? I never needed help. I got up one time and you have to get the pedal to go up and then you give a little hard push and then you're going. You can't imagine it because you're going really fast when you're pedaling.
Posted by Sami at 5:28 PM 4 comments:

I Went to the Library Today

I rented a movie and two books and I'm big enough now and I got my own library card. They gave it back, I thought they wouldn't but they did. I was like, "Oh, I'll never come here again."

We played games and I learned to read. We read Fox; F-O-X, fox. M for, what is it called again...I can't remember. Mouse? What is that one that's like that but doesn't have a line?

And, guess what. We played "Go Fish" and "old Maid". You have to get Old Maid but you can't because I switched them around and Mommy got all the ones that were old maid. And then Mommy was the loser and I was the winner. I won Go Fish two times. And I won Crazy Eights two times. Then I losed Old Maid. I won two games. I won all the games and then I losed Old Maid and Mommy won. And guess what? Whoever picked up the cards slowest won, and mommy was the slowest. Well, actually we were both the slowest so we both won.

Knock, knock. Who's there? Richard. Richard who? Richard I telled you a joke but it's really to Bridger but I forgot the word for whatever that dinosaurs called again. What is it called again? Oh, T-Rex. I really didn't forget. Sorry about that Bridger.

[Dad's Note: Titles shot down by Dad include: "I Went to my Scooby Doo Drill Team". I shot it down because she wrote one sentence about drill team. But she did show me all her dances tonight and I'm really sorry that she can't show you all on her blog. She's adorable.]
Posted by Sami at 10:06 PM 1 comment:

I'm Talking to the Whole World 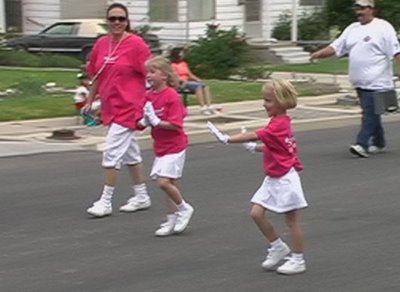 I love ponies and I know you don't like ponies because they're too girly for you.

You don't usually know what my aunt and uncle look like, but that's ok because they look kind of like something, but I don't know what it's called. They look like young people that love people. They're nice and I love them. I love them and my whole life and I like to love them.

We're watching the storm and I goed to a parade. I wanted you to come but you didn't come, but my aunts and uncles came. It was fun. I was marching in the parade and doing these drill team stuff.

AND we saw a circle lightning.
Posted by Sami at 4:59 PM 5 comments: 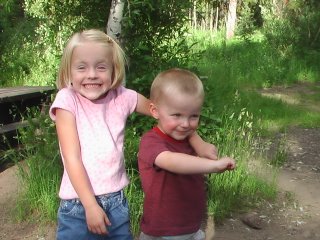 I goed to the camping spot today and we were wondering where we should go. We're going to go camping someday. We saw a deer and my dad runned over a mouse. We saw bear footprints. I never seened bear footprints.

When we got home I was kind of sad. Griffin was so happy because he wanted to go to bed, but usually he doesn't want to go to bed.
Posted by Sami at 11:19 PM No comments: